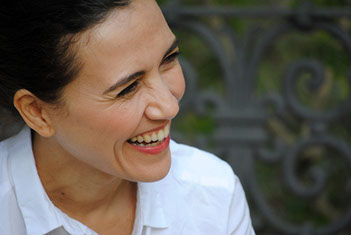 Esther has a University Degree in Dramatic Arts, and graduated in Teaching (Special Education).

She took her first steps as a performer with students of the Central Saint Martin’s College of Art and Design (London) in 2001. In 2003, she began her professional career in Germany with the Roma Theatre Company Pralipe. She continued her development in Spain, especially in the world of children´s theatre and oral narrative; since then she has taken part in numerous festivals: European Theatre Fair for Children FETEN in Gijón, Guadalajara Storytelling Marathon, International Music and Dance Festival in Granada, The Performing Arts Fair Castilla La Mancha, International Theatre Festival of Cazorla, International Art and Disability Festival Escenamobile. In 2004 Esther started storytelling and presenting reading enhancement workshops and theatre for Centro Andaluz de las Letras in Andalucia, as well as for libraries, schools, and other institutions.

In 2015 Esther began her education in alternative pedagogies such as the María Montessori method.

In 2016 she was invited to Paraguay and Colombia where she participated as a storyteller in various cultural spaces and international festivals of storytelling.

In 2016 she also changed her stage name as a narrator from Esther la Juglaría to Esther Yamuza.

She currently combines the teaching of expression and oral narrative for disabled people at Danzamobile with performances and writing.